Do you run a BRAND or a FIRM?

« READING FOR BRANDING: The Little Prince | Main | What COMIC–TYPE is your brand: CAPTAIN AMERICA? »

Is your personal brand The King? Honza is undoubtedly the loudest one of my friends, The Detachables. A tough guy with the appearance of a gentleman who can disarm you with his laugh which can (really) hurt. None of this is why he’s so successful, though. It’s ten years of hard work and a lot of talent that has made him No. 1 in Czech webdesign. What does his being that good have to do with me? Sometimes even the best of us want to consult their future with someone. And, paradoxically enough, the best ones work on it better and harder than the less successful ones.

Personal brands are a current phenomenon. Let’s leave aside what they actually are and are not. Instead, let’s focus on Honza’s brand he’s been developing for a number of years, undoubtedly successfully, and to which I’ve had an opportunity to contribute in its “final version”. Try to imagine the situation I entered simply like this: a guy comes to you, claiming to not even have time to turn round because he is writing a book, teaching lots of people in his courses, often giving lectures, and helping the government, and claiming that he really enjoys it all and that he’s definitely the best in what he does in the Czech Republic. Only he’s not so sure what to do with all this luck in order to get it to make sense. And all this looked a bit like this: 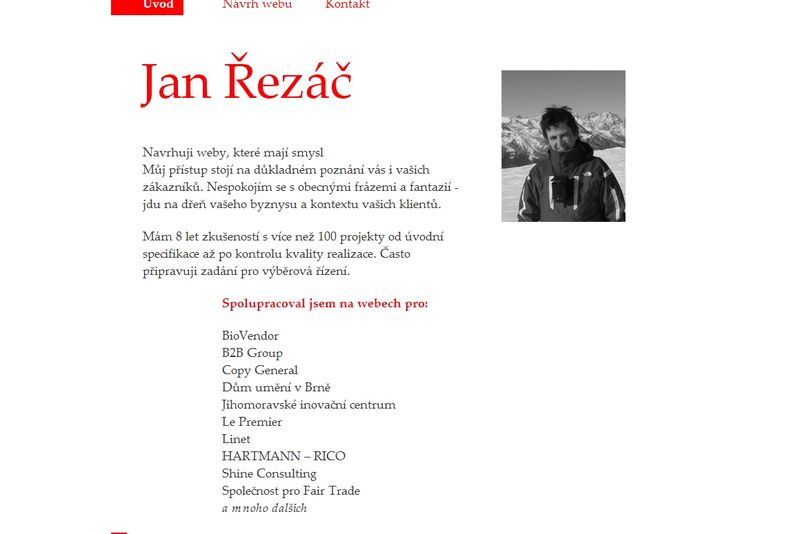 Let’s not forget that it all was, in fact, a plan; paradoxically, Honza didn’t need any other website. And that’s where our cooperation started. What now looks like a simple thing, an excellent design and an awesome website, was preceded by around six months of meetings and consulting. In Honza’s case, I recall William James who said “the art of being wise is knowing what to overlook.” And that was our job. To cut things out (how characteristic, huh?). This is where the sense – so much desired – was hidden. Only after removing all the skeletons from the closet did we start to create together, to search for a form for what remained there. In Honza’s case, my Archetypes came in handy, and I usually turn to them only when absolutely necessary.

I find it interesting to see that so far nobody who has brought his/her own proposals of archetypes to their intervention session has left with the same ones. This is why I don’t recommend them for self-work, for self-study. Only a few manage to look at their brands from the outside, which is the key factor in an archetype’s success. In my brand ABCD tool, I use archetypes only in the BEHAVE phase, whereas the brands tend to work with archetypes as early as in the AIM phase, and that’s often of no value, sometimes even dangerous. Let me give you a simple example. A woman comes to you, a mother. She carries her caregiving in herself very strongly and the situation seems obvious – a Caregiver, right? However, the caregiving factor is only her disposition, whereas we are interested in the external perspective – in her behavior. And then you realize that while some mothers are just Jesters for their families, as they never spoil the fun, other mothers are Teachers for their kids, as the kids will remember even as adults their sentences like “well, for a fourth grader you should be reading much more fluently”. And there are also Hero mothers who even in a complicated family situation get another job to earn money for the kids to live satisfied lives. And I could go on like this; yes, the mother disposition may live in each of the archetypes. Crazy, right? 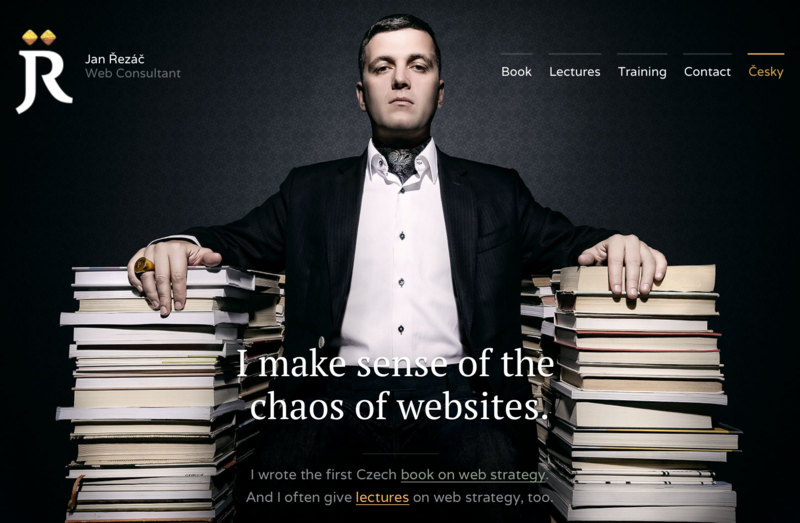 Let’s get back to Honza, though. It was no big surprise to find Honza label himself as a Sage. Quite rightly, most people would say. Honza is an excellent expert! And this is where one of the secrets and magic of brand development lies – the responsibility to choose. Sure, Jan is an expert, but let’s be careful – we’re working with external expectations here! So Jan, would you like to be considered an expert? What do you plan to do for it then? How are you going to feed and support it? The book you’re writing – is it intended for experts? If you look at Jan’s website, you may guess that his team didn’t go this direction. Only rarely do I come across a King brand so I’m even happier that Honza was courageous enough to set out on this difficult path. And as is his habit, he did it with bells on. Yes, Jan is the king of Czech webdesign. Hail Ceasar! The brand fits perfectly not only in its design (excellent job by Adam Hrubý and Comp.), but you can also feel it in it his behavior, clothes, new signet (yes, from pure gold), and mainly his book. 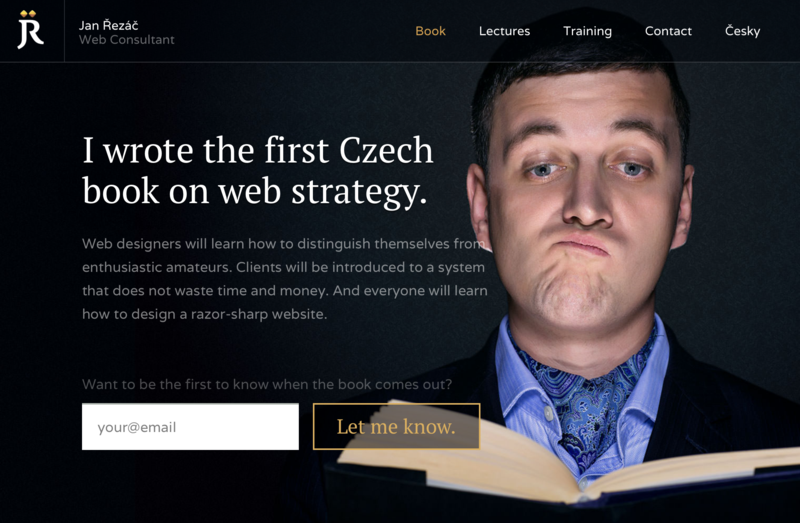 In our plans the book became a proof, a deed of His Majesty Jan. Nobody had created such a book before him, and now nobody is going to try anytime soon. Honza ascended the throne. The throne in front of both the experts and business public. Its kingly name A Website as Sharp as a Razor was my idea for him to re-confirm the position of the one who dictates what’s correct and what’s wrong. Honza’s brand commits to bring order into the disorder of websites, and his book does no less. 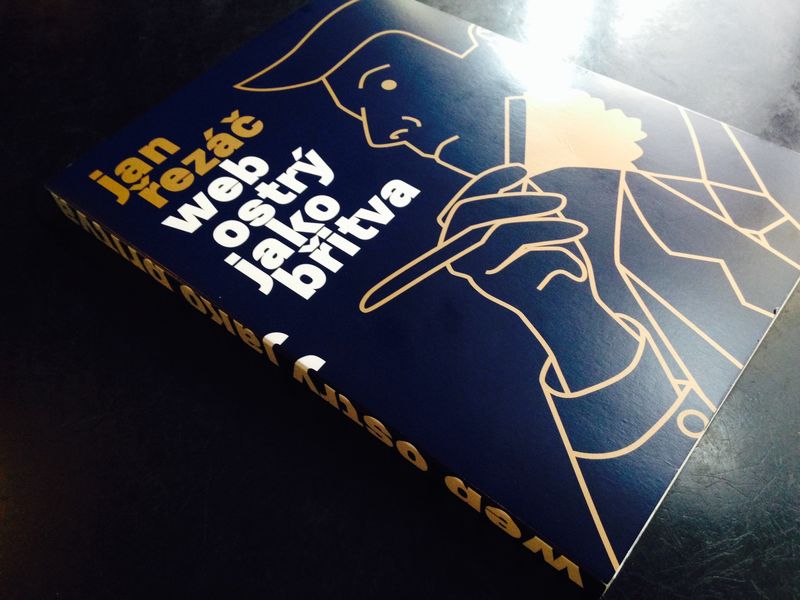 It’s excellent. It’s kingly. That’s already clear from its form, as it requires a lot of courage to publish one’s first book in such an exclusive design. The book sticks out in the shelves as if calling to passers-by. No worries, though; the content is kingly, as well. Honza managed to masterfully transform his key discipline – multi-disciplinity – into a book. Beginners and experienced webdesigners and even their clients – all these will find good insights and useful procedures there. It reminds me of Tim Ferriss a bit, as he says in his 4-Hour Body that you should pick your hundred pages to read. Based on what you’d like to achieve. It’s similar with Honza’s book. In principle, he can help everybody who works with websites in any way. 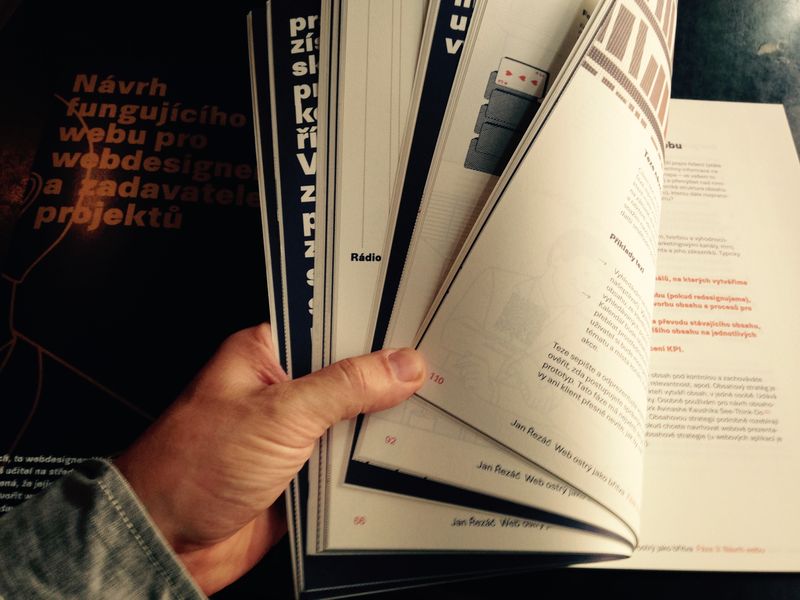 The way I see it, Honza is mainly successful at destroying clichés saying that the designing of websites is a job for graphical artists and coders. His book makes readers think about their motivations to get a new website, helps them look for a goal and meaning of web applications, and shows how useful it is to understand their own brands when building their own online solutions. And all of this is provided to you through a living world of instructive illustrations, tips, and tricks. In my opinion, the book has (currently) only one weakness – it’s only in Czech. However, confidential sources from the team reveal that its international version is already in the works. There’s a lot to look forward to, no matter where you are.

An amateur likes to do what he wants when he wants. A professional does what others want and when they want. And he’s glad about it.

What do you say? And what about your brand? Is it also a King brand? Or did it always think it was but now is a bit in doubt? Continue working; the brand will let you know when it’s the right time. Believe me. Mindless?

P. S. And another comment, the last one for today. I’ve always told my people in the agencies that both success and failure of the client’s campaign is his/her merit, his/her responsibility. We’re just workers doing our jobs, but the client is the one who decides who does what, and s/he’s responsible for these decisions. It wasn’t a very popular approach, actually. Especially when we did well… The same applies in this case too: Honza’s success is only his, I believe. And his brand is successful also because he taps the right people at the right time. I, just like the other members of his team, do my job, but the brand then fights on its own. So what you’ve read here is not a reference to my work, but only what’s inspired by Honza’s work. Honza, with respect – keep doing!

P. P. S. Ok then, one more thing. People often ask me what it was we did with Honza. They say it’s not him! What role is he playing? I never change brands; I only help formulate their internal structure and build on it further. You don’t believe me? Ask Honza whether it’s him and whether he’s satisfied. Just see for yourself.

Promote Your Page Too